Notice: Trying to access array offset on value of type bool in /var/www/wp-content/plugins/Ebor-Framework-master/ebor_cpt.php on line 169
 Great Zimbabwe – House of Stone - The Travel Expert
Activities May 30, 2017

Great Zimbabwe is a complex of stone ruins found in southern Zimbabwe, near the town of Masvingo. I was privileged to visit these magnificent ruins a year and a half ago. 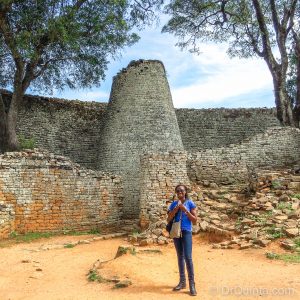 The name “Zimbabwe” is thought to mean “house of stone” in the Shona language. Great Zimbabwe dates back to the 11th century although the site was occupied as early as the fourth century AD.

Archeological findings of glass, porcelain and coins suggest that Great Zimbabwe traded with China, Persia and the Arab world. The city supplied gold and ivory in return. At its peak, the city housed over 18,000 people and spanned 1800 acres.

The city was abandoned around 1450 due to lack of resources brought on by overpopulation and deforestation.

The ruins are of great importance to the national identity of Zimbabwe. Soapstone carvings of the fish eagle found at the site are depicted on the flag of Zimbabwe. The tower at Harare International Airport is designed after the tower in the Great Enclosure.

My tips for Great Zimbabwe are as follows:

There are hundreds of other stone sites in southern Africa, though none as massive and well-preserved as Great Zimbabwe. The ruins are a UNESCO World Heritage Site

Until next time, live young and travel!