How to deal with flight delays 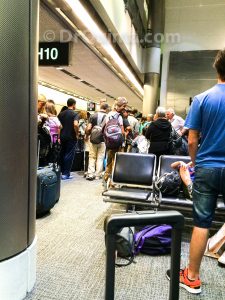 Flight delays can affect how you remember a trip. On my trip around the world, I took roughly 34 flights and, amazingly, not a single flight was delayed or canceled. That has to be some kind of record. But that happened partly due to luck and partly because I used certain tips which I share below.

Last weekend, I flew on United Airlines from Atlanta to Houston. The flight should have lasted an hour and a half. Unfortunately, Houston was covered in fog so we could not land. We circled around until we ran short on fuel, then we diverted to Shreveport to refuel. We disembarked and crowded into the one open café in that part of the airport. An hour later, we were informed that the cockpit door had been damaged. We would have to wait for a new plane. Because of the new plane, a new flight number had to be created and all the passengers rebooked. Apparently, passengers have to be rebooked one by one. That process took almost 2 hours. And then of course, we needed a new pilot and flight attendant…..

We eventually landed in Houston, 6 hours after we were supposed to. United gave us a measly $75 or 3700 miles for the inconvenience. I’d like to think my time is worth much more than that.

So how are you supposed to deal with unexpected flight delays like this? The best thing is to be patient and calm your mind. Waiting can be frustrating especially if you don’t know when the waiting will end. It’s easier to be calm if you have planned with the following tips in mind.

The best way to deal with flight delays is to be calm and patient. Yelling and screaming will not make things happen any faster. In fact, you could make things worse for yourself. Treat the journey like an adventure and time will pass faster.